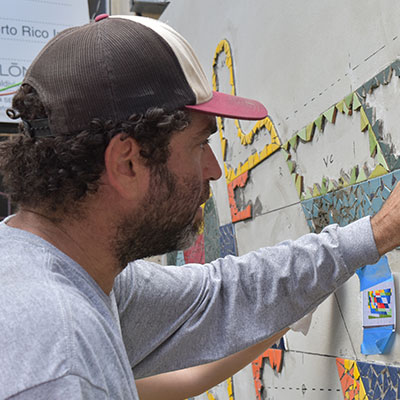 He began his studies in Architecture at Washington University in St. Louis in 1991, there he also takes various courses in drawing and painting to perfect the technique in the plastic arts. During those university years, he takes part in the first art collectives in his career and he works in the design and construction of various theatrical productions in the Edison Theater of the university itself.

As part of a program of the Southern California Institute of Architecture, during his Master of Architecture in Switzerland, traveling throughout Europe he took courses in photography and cinema. He also exhibits his work together with colleagues from the university in the city of Lugano. From 1997 to 1999 he returns to SCIARC in Los Angeles, where he presented his thesis on the ruined structures of Old San Juan.

He designed and built recording studios and offices for Phantom Vox in Los Angeles, Puerto Rican singer-songwriter Robi Draco Rosa. Passionate about art, he moves to New York where he participates in several collective exhibitions while working on his own with architectural firms, institutions such as MoMA and P.S. 1, entertainment events, commercials and movies.

Back in 2001 when he returns to Puerto Rico was his first solo exhibition of paintings “Hustle to fly with some impediments”. During the years of 2003 to 2006, Roberto runs an alternative art space, the RoKA Espacio in Santurce, where over 60 artistic events of all genres are achieved.

Also Biaggi has been professor of design at the School of Architecture of the University of Puerto Rico, deeply involved in the development of this profession on the Island. Currently, and after more than 7 collective and individual exhibitions in Puerto Rico and Internationally, the artist divides his time between architecture and painting, two arts that he works passionately as one.