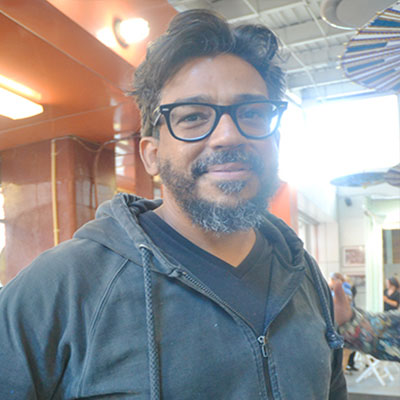 Celso González, Puerto Rican plastic artist, was born on May 17, 1973 in San Juan, Puerto Rico. From an early age his motivation was to create monumental murals. From his art studies in Mayagüez, Puerto Rico and then architecture in Sci-Arc, California. He has already made numerous exhibitions in countries as diverse as Puerto Rico, Brazil, Argentina, Ecuador, Mexico, the United States, Italy, France and Taiwan among others. He also develops in the scenography, illumination, film work, furniture design and construction.

Celso’s art is reflective, it is an introspective work, always honored his Loiceña and Rio Grande roots, where some of the magic that abounds in his compositions germinates. Although today he feels more inclined to interpretation and abstract experimentation,his earlier work, the use of allegorical symbolisms to their roots, such as the vejigante, the popular culture masks, the baquiné and bomba and plena among others. More than nostalgia, Celso celebrates where he came from, where he has gone and where he is going.

Throughout his career Celso has collaborated with important artists from different disciplines including Bill Viola, Carlos Cruz Diez, Ted Carrasco, Wayne Isham, Robi Draco Rosa, William Cepeda to name a few. For the past 8 years, Celso has been working on a commission of the government of Puerto Rico, developing around 40 Public Art projects that can be appreciated in monumental murals throughout the island.

He has dedicated himself to artistry and reveals to us in his interior, his hope, that which says: “Look, I am here and from here I have come”.